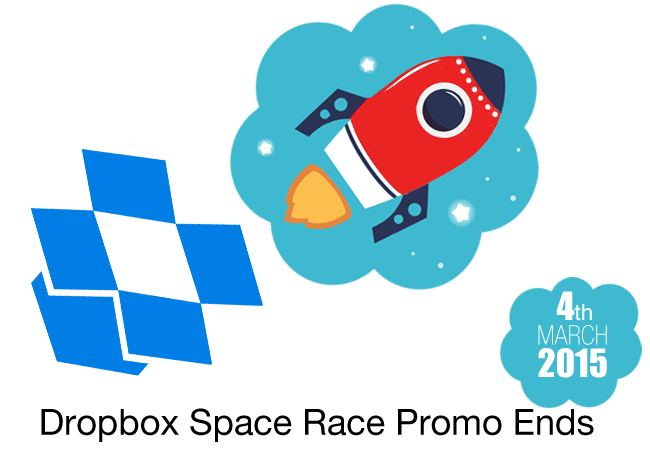 If Dropbox is an integral part of your tech arsenal, we might have some bad news. Dropbox recently announced that its Space Race promo is going to expire as of March 4, 2015.

Students of participating schools, who had taken part in the Space Race challenge received additional storage space for their Dropbox accounts for Free. The amount of storage space depended on how many students participated and completed Dropbox’s Space Race Challenge per university and could go up to 25Gb.

In their email Dropbox has advised users to make sure that they have sufficient free space left after the promo space is gone to ensure proper operation. Users who are over quota would not be able to add new data to their accounts.

For users looking to continue using more than their allotted storage space Dropbox has recommended upgrading to Dropbox Pro.

Dropbox Pro is a subscription based service that provides 1TB space for $99/year or $9.99/month. Features include:

As an incentive if you decide to upgrade to Dropbox Pro before the March 4th Deadline you can receive a discount of 30% for the first year which will set you back about $70 after a saving of roughly $30. 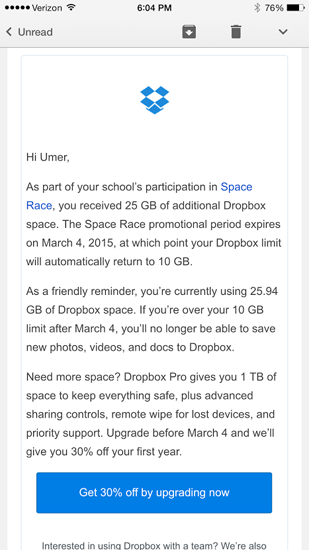 As an alternative to paying $70-100 for Dropbox, users can make the switch to Google Drive which offers cheaper subscription rates. As their support for education Google announced that students can now enjoy unlimited Google Drive storage space (5TB per file size limit) which is quite amazing.

Personally, I really like the seamless app integration Dropbox has to offer. It is a breeze to configure mobile apps save data onto dropbox and services to sync your information onto Dropbox. Its intuitive interface and nifty apps for mobile devices surely put you to at ease to access data from anywhere. While most other services have only caught up to allow automatic photo upload, Dropbox has already partnered with Microsoft to allow users to let them save their Microsoft Office documents onto Dropbox. So it allows users to put their data in place with the surety that it will be available when they need it.

If you are one of the affected Space Race users, what would be your game plan?