1. Get invited to join Dropbox

If you don’t already have a Dropbox account, get one of your friends to invite you. This way you both get extra 256 MB. Regular signups don’t get you anything.

You can log on to the Dropbox site and click on the ‘Getting Started’ tab. If you complete five of the simple task out of choice of seven you get an additional 250 MB. If you use Dropbox regularly, odds are that you would have completed most of these tasks already.

Connecting your Dropbox with Social media sites such Twitter and Facebook to get more additional space. Simple tasks such as linking to Facebook or following @dropbox will earn 128 MB apiece. Total Space to be earned: 640 MB. Click on the following link to start earning space!

You can invite your friends and family to start earning 250 MB for each new Dropbox user that is referred by you! Earning space this is capped at 8 GB, which mean 32 referrals.

5. Install on your HTC phone

HTC has partnered up with Dropbox and now new HTC phones comes with Dropbox pre-installed. Using Dropbox on any HTC Android phone will earn you 3 GB for ONE YEAR. 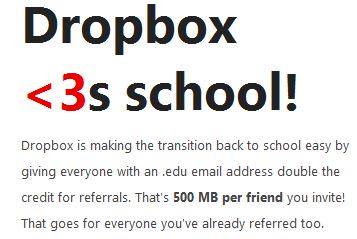 Dropbox is all for education which is why it gives 500 MB for each referral instead of 250 MB once you connect an .edu email address to your account. The space earned also increases from 8 GB to 16GB. This works with across the globe even in countries which adopt a different standard for their education email addresses. This will work on all past and future referrals.

Currently Dropbox has rolled out a beta built of their desktop software. Once installed, you can import videos and pictures automatically from cameras, phones and SD cards. During the beta period, Dropbox is offering more free space to test this new feature. The first time you use this feature, you’ll receive 500 MB. For every 500 MB of content uploaded from this feature, you’ll receive another 500 MB, up to a maximum of 4.5 GB. Click on the link below to download the experimental built.

Finally, Dropbox held a scavenger hunt in 2011 where they gave out extra space for completing their challenges. Keep an eye out for Dropbox events by following them on Twitter or Facebook; or checking back here.

That would be sweet!