Apple has revived some nostalgia by adding a new featured section to its appstore called “Pay Once and Play”. Players browsing for new games on iTunes now have the option to view games which just require a one off payment i.e. purchase full featured games without any in-app purchases required later. Apps like these are reminiscent of childhood years of appstore when same app was released in two flavors; a free version that offered limited features and often dubbed as lite, while the full version could be had at the price set by the developers. 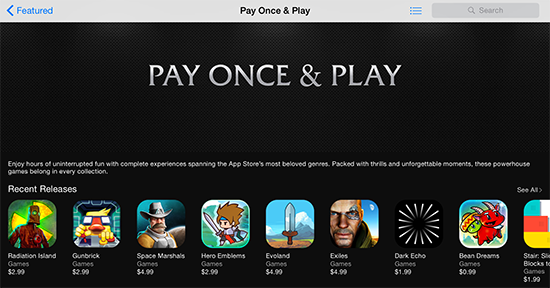 Players who are tired of being lured into paying large sums of money via installing free to play games can rejoice and play carefree after the initial payment made to purchase games. This not only enhances user experience but makes gaming safe by eliminating accidental clicks.