Apple recently released 8.1.3 for its iOS devices aimed to address a couple of issues. The update though not a very huge one does bring some solace to users with limited storage space who have been unable to update to the most recent iOS iterations due to its sheer size. Although the reduction in update size it not confirmed but anything less than the whooping 5.7Gb free space requirement is welcomed. 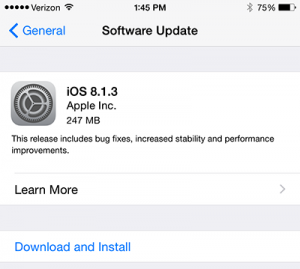 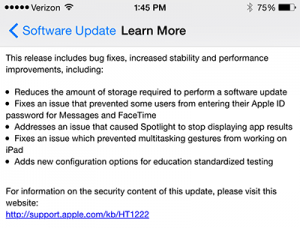 However, Apple’s support community has been ablaze with the GMT bug which causes iOS calendar to be erroneously synced across devices. Sadly this update does not address the GMT bug wrecking havoc within the corporate world.

Secondly, older iOS devices did not get any love as they are still troubled by the intermittent WiFi connectivity issues making it irksome for users to jump the iOS 8 band wagon.

These issues have surely marred iOS 8’s adaption within the Apple eco-system as it has been much slower compared to iOS 7’s adaption.

Hopefully Apple would be releasing patches to resolve these issues in the near future now that they also have Google’s Project Zero on their tails. One more group to worry about.