A few years ago when the first ipad was unveiled  many thought that it would fail. They termed it as a device that was neither a phone nor a computer. A few looked down upon it as a mere toy only good for playing games.

Now though the tide has turned! Not only did apple manage to create a technological marvel, it in fact created a massive want factor as well. Ipad today can be classified as one of the most sought after gadgets. Other major players were forced to accept its unparalleled success and soon we saw them hastily jumping the tablet bandwagon with their own iterations.

The ipad becoming the most sold tablet across the globe has played it part in exacerbating the demand for internet/data services. Cellular companies have responded well by offering customized data plans to its ipad 3G consumers. These plans however require you to have a monthly subscription for the service and bill you at the end of the month. Even in countries where the ipad 3G is not officially supported we  have companies offering the new micro sim variant with a respective data plan to use on an ipad 3G.

Though the monthly based usage plan seems the way to go you might have often noted that a prepaid connection from the same company gives you the flexibility of buying data buckets or surprisingly offers the same unlimited plan cheaper than what it does on post paid.

Let us for example take Zong in Pakistan. They offer a very convenient data plan for their prepaid customers which costs you Rs. 200 per month with a fair use policy of 2gb while they offer the same plan with a slightly higher limit for Rs. 400 to their post paid customers. (It is cheaper and has better EDGE services than most others).  While other companies though charge about Rs. 500 for the same unlimited plan with their own variants of data buckets ranging from 10mb to 300mb.

It all sounds good on paper but one might think that the lack of a dialer on the Ipad 3G would make it impossible to use a prepaid sim because:

a) You cannot call the helpline or run a USSD code to recharge your account using a scratch card.

b) You cannot check your remaining balance, since it too requires you to make a call or run a USSD code.

(There is an application btw that lets you use your Ipad 3G as a cellphone, its called phoneitpad developed by iphoneIslam and costs $19.99 per device.)

Considering that we are not going to purchase any additional software, here is a safe and legal workaround that would allow you to use any sim you like. Additionally This guide would let you:

On your Ipad navigate to Cydia (pre- installed on all jail broken devices). Go to the sources tab and add the bigboss repository if it is not already there. Here is the address to the repo: 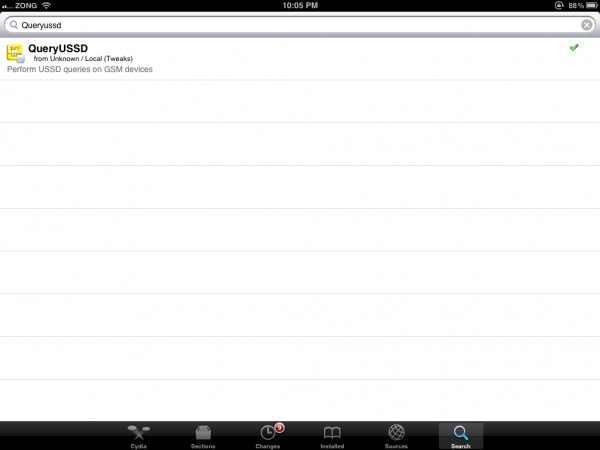 You would also need the insanelyi repository: 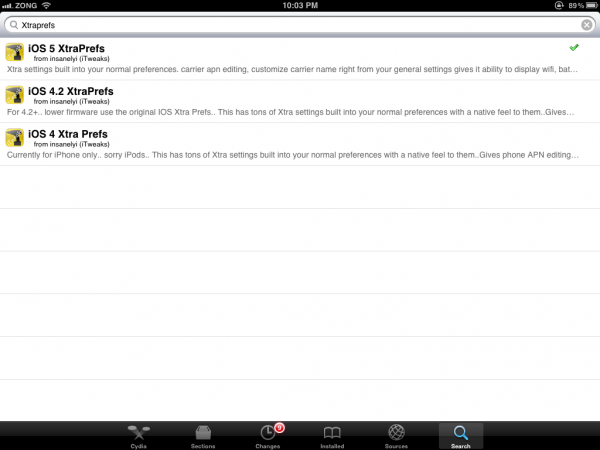 Once both the repositories are added go the search tab and install QueryUSSD and iOS (your ver) XtraPrefs.

Once your device has restarted/resprung you can find QueryUSSD in the ipad settings under extensions!

QueryUSSD lets you run any sort of USSD code and gives you the result so you can easily recharge and even perform balance inquiries!

You can use query one field to enter the USSD code for your mobile operator so that you do not have to add it every time when you want to make a balance inquiry. This USSD code can also be run by customizable key combinations making it easy and convenient to use. This can be easily customized under activation methods.

Choose a method that is easy for you. I selected the volume buttons one where you have to press both vol up and vol down to activate the query. It is easy to use  yet saves you from accidentally activating. And here we have QueryUSSD in action:

And the results, mine is out of credit hence the error! 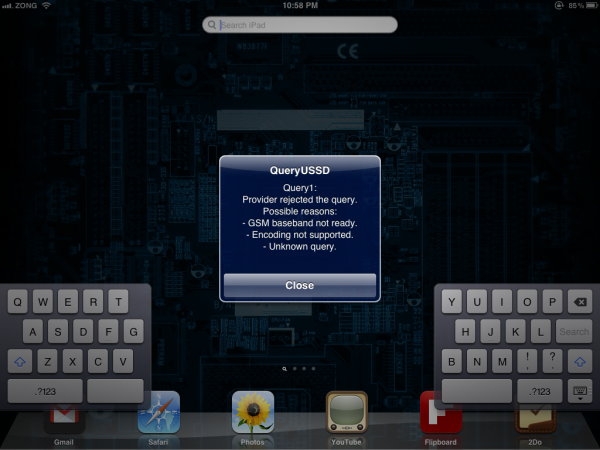 By now you might be wondering why did we install the other tweak? That is for unlocking the APN settings for your Ipad! Usually carriers lock these settings so that you cannot use a different sim card.  APN settings can be configured under Cellular Data> APN Settings.

For Zong you may enter:

Assuming that you have your micro sim ready by now,  just insert it into the ipad using the mico sim card slot located on the side of your ipad 3G. Wait for the ipad to detect your  network and with that you have  successfully configured Prepaid EDGE/data services on your ipad.