Song Pop is a creative multiplayer app that tests your knowledge of all kinds of music and lets you show it off by challenging people. You can create an account on the app with your email, or you can just log in using Facebook. You can play with your Facebook friends online, and with those friends who do not have a Facebook account by entering their email/username. For those of you who do not have friends to play with; you can choose the Random option and Song Pop will find one for you. The game is available for both Android and iOS devices. Owners of both devices can play with each other, so it doesn’t matter if you have an iPhone and your friend has an HTC; you’ll still be able to challenge him/her. If you do not have an Android/iOS device, don’t worry; you can also play online using Facebook and so, no one gets left out.

When you challenge a friend, the game tests your song identification skills by making you guess the titles/artists of five songs. You get five options out to guess from you can also select what genre or what decade i.e., 90’s, 80’s etc., songs you want to identify. The wide variety of the playlists you can challenge someone from makes the game playable for people of all ages. So it doesn’t matter what your age/preferred genre is; you can choose the playlist that best suits your desires. 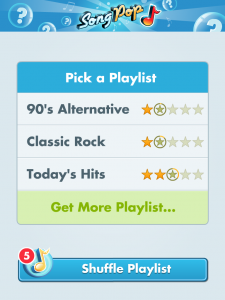 Once the other person responds to the challenge and gives a shot at guessing the same 5 songs you did; your scores are tallied up and you get to know whether you”ve won or lost the round. The total score of getting a song right depends on you guessing correctly and the amount of time you took while guessing. After the winner of the round is declared, the next round begins and this time the other player chooses the playlist to challenge you with. 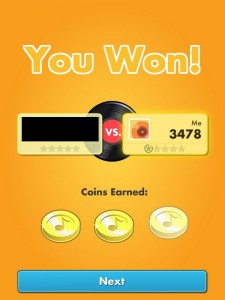 By using the coins they earn, the players can unlock power-up items. These include new playlists, new songs, and you can also use these to remove two incorrect answers from your challenges. Coins can also be purchased using PayPal, mobile phone and credit card. 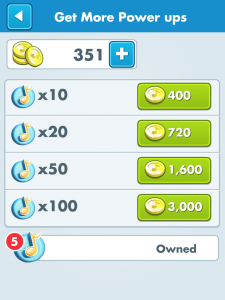 This game does have a negative side to it though. Firstly, the game has no single player mode; if you aren’t connected to the Internet, you simply cannot play the game. Another thing I didn”t quite like is, both players don’t play with each other simultaneously; you have to send the other player a challenge and wait for him/her to respond in order to proceed with the game. In order to make the players feel that the game isn’t completely asynchronous, you can see the song/artist your opponent chose while you’re guessing. This does have a downside to it as you can get away with a right answer even if you know nothing about the song. You also have to progress in the game to unlock new songs and playlists or else your stuck guessing the same songs again and again. There is also no way to communicate with the person you’re playing the game with in the game; a lot of people are against not having this privilege in the game. 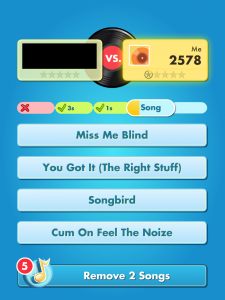 This game is a must-play for all the music lovers out there. It is one of the best multiplayer games and thus it is ranked as the #1 free app on the app store.

So what are you waiting for?
Check it out at the App Store, , or on Facebook.